Without a doubt, one of the most exotic and colorful boots in the world is Mongolian gutals.

The main feature of the Mongolian boots is their unusual shape with upturned toes and various ornaments, which are so different from modern and western shoes. Mongolian gutals may seem crockery, bulky and uncomfortable for younger generation or foreign people.

Surprisingly, those strange and eye-catching decorative boots are still worn in Mongolia. So you must be interested in why those uncomfortable gutals are still demanded even in the 21st century among the Mongolians?

The fact is that there are still a lot of pastoralists, who are practicing a traditional nomadic way of life, somewhere in the vast territories of Mongolia. And it turns out that it is more convenient to wear traditional gutals over modern bootsin everyday life in Mongolia.

Historically speaking, Mongolian boots with an upturned toe have been appeared in the time of the Huns and have been constantly modernized during the Mongol empire. Then it acquired its modern form in the early period of Manchurian domination.

The Manchus took advantage on, internal strikes of the Mongolian nobles, and once has conquered powerful Mongolian aimags in the first half of the 18th century. The cautious Manchu king ordered the Mongolian warriors to wear heavy and uncomfortable boots as to impede their rapid and strong body movements. But the Mongolians quickly outwitted him by changing their boots according to their needs, that only its appearance retained the same.

Mongolian gutals are made of cattle leather with stitched sole, that it becomes not that heavy and inconvenient as it seems. The proof is that even Mongolian national wrestlers can compete each other in these traditional boots.

And the gutals used for wrestling would not hamper the wrestlers’ movements; but it would protect his feet and knees. Also, the special shape of upturned toes helps to fulfill wrestler’s performance including various wrestling techniques to throw his opponent away to the ground.

Mongolian boots are also completely suitable for continental harsh climate with hot summers and cold winters. As the extra air, which filled the space in the upturned toe allows the gutals to keep cooler in the summer and warmer in the winter.

In addition, Mongolian boots are perfectly adapted for riding. Here it is necessary to take into account that nomadic pastoralists in rural areas spend a most of their time riding on the horseback.

And the upturned toe would not allow the gutals to slip out of the stirrup, even if the horse suddenly starts to buck or gallop. During a fast gallop on a tight saddle, the special design of the gutals allows the horseman to stand on the stirrup.

It is appropriate to note that the design of the gutals is fully harmonized with the outlook of the Mongols, who respects the mother earth with a soul of never harming the environment. In other words, Mongolian gutals with upturned toe and flat soles without heels do not rootle and destroy the soil and herb.

As it has upturned toes, the boots do not come across stones and other objects, so that the surface of the boots remains undamaged. Generally, Mongolian gutals are worn out for a long time; even a grown-up children could pass their boots to their younger brothers.

Mongolian boots consist of two parts: actual boots and the special long socks, which are made of a thick fabric inside. Long socks are to protect feet from cold and gall.

Particularly, a higher importance is given to the ornaments embroidered on the gutals. In the past, one could get aware of someone’s rank and significance by just looking at the patterns in his boots.

For example: ordinary herdsmen has no patterns on his gutals, but the noblemen, bureaucrats or lamas are used to decorate their boots with ornaments according to their rank. The higher the rank of a man was, the more patterns he had on his gutals.

Also, the same can be said about wrestlers. Beginners or lower-rank wrestlers wear boots without patterns, eminent or higher-rank wrestlers could decorate their boots in accordance with their competence and victories.

In nowadays, Mongolian boots have embroider from eight to 64 ornaments.

Mongolians usually respect elder people. Simply, there should not be so many patterns on the boots of children or younger people. But, elder people could wear their boots with 40 ornaments, and the eldest people of a family could wear – with 64 ornaments.

The biggest boot in the world

There is a museum complex, called -Tsonjin Boldog with an enormous statue of Genghis Khan, located 53 kilometers from Ulaanbaatar. One of the main exhibition of this complex is an extra-huge Mongolian gutals.

The size of this exhibition is quite impressive that the height of the boot is nine meters, which is equivalent to the height of an three-story house. And the length of the gutal is six meters and the width is two meters.

The boot is 195 times larger than the standard European shoe size of 39. And if it is to fit a giant people such as a well-known fairy-tale hero Gulliver, he should be 45 meters in height and 4.4 tons in weight.

Currently, the Mongolian gutal in the “Tsonjin Boldog” complex is considered to be the biggest boot in the world. 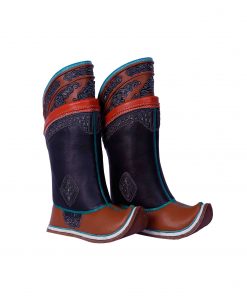 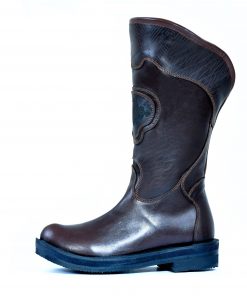